Corryong Paragliding invites all Paragliding pilots for 7 days to compete in one the best Alpine flying areas in Australia the Mt. Elliot, starting 14th January! The Corryong Open, with 250 WPRS points available,  is a high level AAA/CAT2 competition which is sanctioned by the HGFA and it is aimed at experienced inland intermediate to advanced rated pilots. If you are a pilot that fits to this category, it would be a magical experience for you to fly on this extraordinary mountain.

Mt. Elliot is the regular location for Corryong Cup and Victorian open. This mountain flying is the best around. The valley system makes the flying exceptional and retrieves quick and easy.

To make it more clear for those who have never been to Corryong, it is located just a few thermal glides from Mt Kosciuszko, which is the highest mountain in Australia.

Mt. Kosciuszko is where the very first Australian Paragliding Nationals were hosted here in Thredbo 1990. Back then, the competition task was flown from the top of the mountain which is 2200 metres.

Paragliding is an extreme sport that takes you off the ground and fly like a bird! Those who never had the taste of paragliding can start with what is called Tandem Paragliding. In tandem paragliding you will be flying with a pilot who is controlling the wings. This way, it will be much safer for inexperienced users. 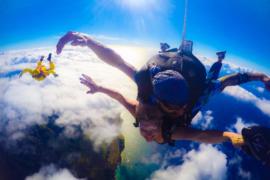